The year of marathons started off in January in Austin, Texas. We decided that a good start would be the 3M Half Marathon, which promotes itself as a downhill run into downtown Austin finishing at the state capitol.

This would be our second trip to Austin, a city that quickly became one of our favorites. SoCo- check. Good food- check. Interesting and friendly people- check.

We arrived on Saturday and took the bus into downtown. Yes, we took the bus.  It’s cheap and will drop you off a few blocks from your hotel downtown. Plus, it has racks for your suitcases. Can’t beat it if you don’t mind commuting with others.

This time we stayed at the legendary Driskill Hotel in a nice but small room. But hey, we found a heck of a deal on Hyatt.com. The next item on our list…securing Voodoo Doughnuts for a post-race celebration. A voodoo doll was on my list.  Then we hit the convention center for packet pickup. Very easy and well staffed. And when in Austin, where do you spend a relaxing Saturday afternoon shopping and seeing the sites? South Congress. (Shout out to my favorite boutique, Creatures!)

Race day morning came early, and the hotel had a lot of participants. However, the city shut down the roads for the race, and taxis were scarce. Yes, taxis, as Uber and Lyft aren’t in town, but the Uber-like Ride Austin is. Gonna admit, I thought we might miss the start, but we made it with five minutes to spare.

The weather was prefect, sunny and clear, a little windy and in the 50’s. The course was well marked and rolled a little, but we were indeed going downhill. (My quads would tell me that the next day.) People were friendly, and the stops were well staffed. The finish is up hill in what can be a bit of a wind tunnel, but it makes for picturesque photos in front of the Texas capitol.

We both had personal bests!

We toasted the finish at the speakeasy, Urban Cowboy. The drinks were fantastic and the bartenders friendly and knowledgeable. We will be back, Austin. See you soon! 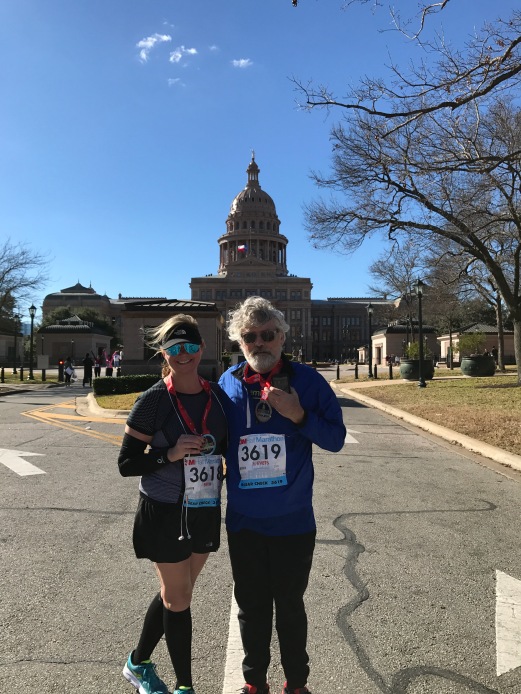