It’s that time. Time to run and make Rock ‘n’ Roll Marathon Hall of Fame. Steve and I came in on Saturday to run Sunday. We stayed near the start and finish lines at the Hyatt Regency. The hotel was large and located on the Riverwalk, which was crowded. The location was convenient though allowing us to walk along the Riverwalk to packet pickup.

Before heading to the Hall of Fame induction, we went to lunch at Cured. I cannot, cannot recommend this restaurant enough. I had the best gumbo I’ve ever had there. The food was exceptional. It’s one of the best meals I’ve had all year. I only regretted that I couldn’t indulge more knowing that I had a run the next day.

The Hall of Fame induction was a letdown for me. I can’t lie. Perhaps we missed our part as we were 10 minutes late? Perhaps you have to do 25+ to get noticed at the induction? But wait, 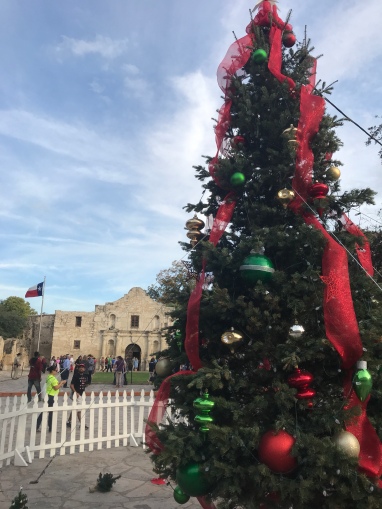 there were people who did 25 this year? WOW!! I can’t even imagine what commitment that was and the toll on the body.

After the expo, we walked back towards the hotel and the Alamo. It was bustling as the weather was nice and the holidays were near.

Race day was rainy and warm. The first race where it rained this hard the entire year. How apropos! It was the last race of the year, and the first one we had to handle in the rain. The rain poured for the first half of the run. We had to dodge puddles and hoped we could keep our feet dry enough to avoid blisters. Steve even stopped and threw his insert away, because it was soak and causing him to blister. Thanks goodness, this was our 20th half marathon and not our first, or we may not have know how to handle the rain. The course wasn’t bad, mostly flat and the group had a positive feeling even in the rain. Finally, we crossed the finished line and could celebrate our accomplishment. We’d done it. 16 half marathons in 2017. Rock ‘n’ Roll Hall of Famers. I’ve never been more proud of a pair of golden headphones.