On February 4, 2018, Costa Rica would elect a new President. The staff at National rental car told us it was Election Day in Costa Rica, and we would see a lot of people out going to the polls and might see protests. How exciting to see the democratic process in another country!

The polls are tents by the road, one for each party.  Supporters dress in the colors of the party they are supporting. If the party isn’t supported in the area, then it appears that there’s no tent for that party.

We saw flags for each party hanging from trees along the road. We saw party flags flown from cars, and we even saw a truck with one party going to collect voters (I assume). 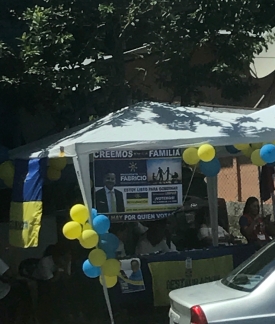 Then the election was over and while in Puerto Jimenez we saw revelers celebrating the election’s results by having a parade and honking horns.