Steve and I landed in San Jose, Costa Rica Saturday evening. Since we landed late, we stayed at the Doubletree Cariari in San Jose Costa Rica, near the airport. We’d stayed at the hotel before and knew the rooms were large and the staff friendly. 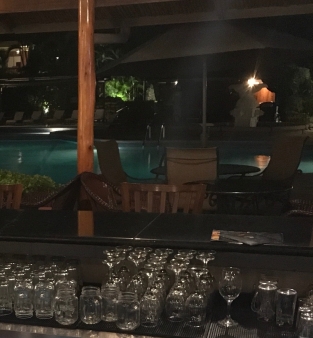 We enjoyed a late meal at the bar and were pleasantly surprised by the cool evening.

The next morning we had breakfast by the pool in the open-air restaurant at Doubletree Cariari with long-sleeve shirts and pants on as it was cool in the mountains of San Jose. When we checked out, we asked the valet to grab us a taxi as we’d done in the past. We needed to get to the car rental lot, which would be offsite from the airport. The hotel required us to pay up front for a taxi at a new “transportation desk.” The next thing we knew, we were back at the airport and told to go to the rental desk by baggage claim. We got on National’s shuttle and were dropped off at the car lot, which was back by our hotel! I was furious. This nonsense cost us an hour and $30. (Traveler’s tip: Incidents like this aren’t unusual. This is done to earn larger tips and travel costs.)

National’s staff was waiting on us with the GPS and the SUV we’d rented. In the past, we’ve had to argue with another rental car company that we didn’t rent the tuna can they said we did.) At National, it was the exact car from their mobile app. This was our best rental car experience in Costa Rica! (Traveler’s tip: I’d suggest paying a little bit more to use a car rental company like National versus a local one like Adobe based on personal experiences.)

We were off. The weather was perfect for a drive south to the Osa Peninsula and the town of Puerto Jimenez.  Most of the drive was highway including three tolls to get out of the San Jose area. The drive took us six hours through winding roads, past the Pacific Ocean and past the Gulfo Dolce. The brakes were pumped for iguanas crossing and even one Coati.

What a beautiful day for a drive.