Steve and I were excited to run the Nashville Rock ‘n’ Roll half marathon. We’d get to run areas where we’ve been training and neighborhoods we never would otherwise, like 12 South and the Belmont area. However, there was something comfortable to know that you’re running at “home.”

Because we had a break between Dallas and Nashville, we found that our training motivation wavered; plus, I came down with a sinus infection and gave into it after the Dallas Rock ‘n Roll half marathon. That meant I was out of my routine, and, to be honest, there were a couple of weeks that the only run I did were my long runs. So, I wasn’t feeling my most confident leading up the race.

Then the weather alerts for the race hit, “HOT, hot, hot.” Warnings were sent almost daily from the Rock ‘n’ Roll marathon warning of the heat. The organizers even pushed the start time back by half an hour. This didn’t help my confidence either.

Ahead of Saturday’s half marathon, the series hosted the inaugural 1-mile run on Thursday night. Steve and I participated, and it confirmed my worries. Yep, I was not feeling as great as I had in March when I pushed myself.*

Saturday came, and the humidity was already high at the start. The race had 30,000+ runners so there was going to be a lot of traffic on the course. We decided that the most important thing was to finish feeling good.

The crowd did take its toll on my timing and, at times, my pace as you would hit a wall of walkers (points for the Walking Dead reference?) and had to either fight through them a la Michonne or give in and walk. The heat was a factor, and I saw too many ambulances at the finish line and on the course. :  (

Steve and I did finish though, and we weren’t overheated or sick so we called it a win.

I’m curious, what hot weather tips do you have? I’ll take’em. 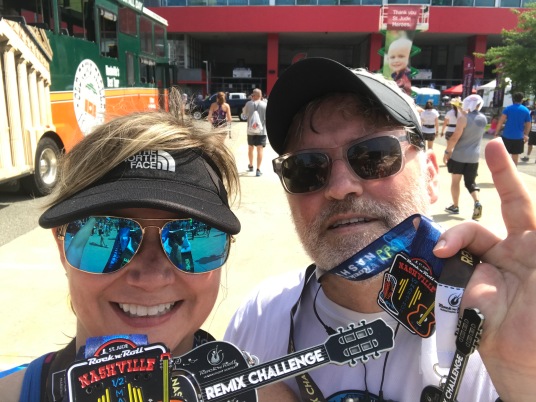