We were able to drive to St. Louis for last weekend’s run. We brought the pups and stayed at the Union Station Hotel. While the hotel is beautiful and historic, I found the staff not very helpful or engaging.

As usual, once we checked into the hotel and got the dogs settled, we headed to the race expo. This was the smallest expo we’d seen so far and weren’t even to get assistance checking out. It was disappointing but not surprising as Rock n Roll was hosting three events across the country the same weekend. It showed at the expo and even at the race start that St. Louis wasn’t the priority race that weekend.

We tried a local Italian restaurant for dinner near the hotel. The food was okay, but the staff was polite and attentive. We went to bed early as we planned to run the 5K on Saturday morning.

And, we missed the 5K. We’d both been on the road for work that week and were tired. 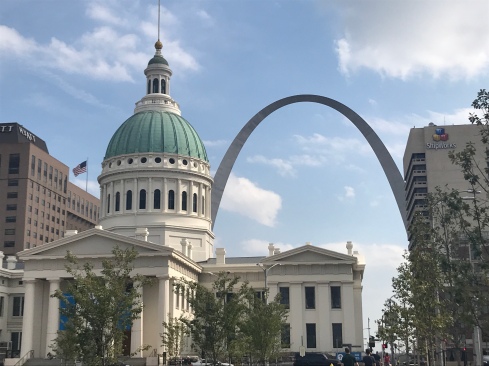 Steve said I slept through the alarm and didn’t move. When that happened, he decided that I needed rest so that I could have a good run on Sunday. So, we slept in.

We spent Saturday strolling through downtown and to the Arch. It’s such a landmark and punctuates the skyline.

For dinner, we went to The Tavern in the Central West End. It was a delicious meal. I typically don’t photograph my food, but the gazpacho below deserved to be photographed. It was a strawberry gazpacho with edible flowers. The first time I’ve ever been served edible flowers. It was amazing and was good power for the run.

Race morning was rainy and cold. Plus, the start was delayed by like 45 minutes. This was a first time we’d experienced a run starting late. It wouldn’t have been bad but we were standing in the rain in corrals waiting for the start. Bummer.

Once we finally started, the rain subsided. And I was in for a pleasant surprise.  The course was hilly; running up and down a hill, and then up and down the next. However, the course took us past beautiful homes with folks cheering and buildings with gorgeous architecture. There were plenty of distractions on the course to keep you interested and involved. It made the hills not so bad. (And, when I say it was hilly, I told Steve when we were running a flat part, “My legs aren’t sure what to do. They’ve become accustomed to running up and down. The flat is actually hard right now.”)

We finished close together with the sun out and the Arch in the background. Eleven Rock ‘n’ Roll half marathons done. Four more to go!